Today is the first day of the Olympic games in Rio. For four years, Ukraine was preparing for the games which will be watched by millions of Ukrainians in the course of the next three weeks.

Let’s keep our fingers crossed for Ukraine’s team and wait for new victories. Yet, there is also a dark side of Ukrainian sport which has nothing to do with fair play. It is difficult to assess the needs of the sportsmen in an objective way. That is why sport is always a honey pot for corruption.

Below we collected the top-5 schemes used by Ukrainian sports officials to embezzle money from the state budget. All the schemes were already uncovered by the Ukrainian law enforcement, they all can be found in the Unified State Register of the Court Decisions.

Scheme No. 5  ‘Communist NGO’ in Charge of Young Patriots

In the times of paperedniki [Ed.: journalist slang word denoting the entire Yanukovych government using ‘Azirivka’ — the quasi language of speeches of Ukraine’s ex-Premier Mykola Azarov, who was educated in Russia, never mastered the Ukrainian language well enough to speak publicly and spoke with a harsh and funny Russian accent. ‘Paperedniki’ means ‘our predecessors’ in Azirivka] the government wasted money on numerous ‘NGOs’ specializing in ‘growing a new generation of Ukrainian patriots’ at taxpayers’ expense. Law-enforcement professionals figured out that the cheats owe more than ₴2 million to the budget.

The Communist Union for Ukrainian Youth named after Vladimir Ilich Lenin is a good example. In 2011 the komsomoltsy wasted ₴190 000 on the ‘Young Guard of the Motherland’ program of patriotic education which they invented themselves.

The komsomoltsy allegedly spent ₴112,000 on lodging and feeding their trainees in the dubious Zhuravochka sanatorium, which is a private venture renting premises of a state-owned recreation complex. Yet they could not provide documents proving the actual expenses.

On behalf of the State Service for the Youth and Sport the contract was signed by the Deputy Head Serhiy Hlushchenko, whom we will see again further in this text. Oleskandr Prysyazhniuk, member of Zhytomyrska Oblast Council signed it on behalf of the Communist Party of Ukraine.

After the komsomoltsy affair Prysiazhniuk made rapid progress in his career. In 2012 he became one of the youngest members of the Rada,  chairing the Rada Committee on family, youth policy, sport and tourism.

The politician who was entrusted with educating ‘the new generation of patriots’ made hateful media statements like ‘the red communist flag is trouble for the Nazi offspring, the neo-fascists of Western Ukraine’.

The owners of Zhuravochka in the meanwhile failed to compensate the rent of premises to the state budget. Nevertheless, the Regional Department of the State Property Fund in Kyivska Oblast failed to terminate the contract with Zhuravochka and return the object to the state. In 2014 Zhuravochka stopped paying the rent again.

In May 2016 the Economic court of Kyivska Oblast obliged Zhuravochka to compensate more than ₴2 million and vacate the premises. As Nashi Groshi investigative project informs, one third of the statutory capital of Zhuravochka is owned by Valentyn Tregubov, a father of a ex-MP from Yulia Tymoshenko Bloc Yuri Tregubov.

Tregubov junior, who was recently fired from the position of the First Deputy Prosecutor of Dnipro Oblast, recently attempted to become the head of the National Anti-Corruption Bureau (NABU). In 2015 his tax declaration included almost ₴1 million of gifts and prizes, in 2014 the ex-MP was not working anywhere and lived on ₴140,000 of ‘other income’.

His wife declared ₴1.5 million, of which only ₴29,000 was personal income.

Scheme No. 4: A Training Session that Never Was

The ‘honored trainer’ of Ukraine Kostyantyn Stepantsov embezzled ₴1 million, which was provided to compensate the training session expenses of Ukrainian athletes. This was announced by the Prosecutor General in April 2013. The court found the trainer guilty of forgery and ruled a probation term of a year and a half.

In 2009 Stepantsov was a senior trainer of the Ukrainian international athletics team. In 2011 — 2012 the team visited Kislovodsk in Russia. The trainer got almost $430,000 to cover travel expenses, lodging and food.

Stepantsov’s duties were only to assist with the training, i.e. compile the training schedule and implement it. Yet, he volunteered to find lodging and training space and execute rent contracts on behalf of the Ukrainian athletes.

In Russia, Stepantsov met a person whom he considered to be a manager of a Russian army sports base. ‘The manager’ gave Stepantsov fake documents certifying the payment of the rent at the Southern Regional Division of the Central Sports Club of the Army at the Ministry of Defence of the Russian Federation, which was later reorganized into Southern Federal Center for the Sports Training.

In truth, Ukrainian athletes resided in Kislovodsk, primarily in private houses or with friends and relatives, while Stepantsov was reporting the money as having been spent on lodging and rent of equipment. He also knowingly paid per diems to nine athletes, who did not participate in training sessions. Stepantsov then submitted fake documents to the Department of the Sport Teams and Sports Procurements at the Ministry of Youth and Sports (Ukrsportzabezpechennya).

Director and accountant of the Southern Federal Center for the Sports Training testified that no training or lodging of the Ukrainian athletes was organized by their center at that time.

Pechersk District Court of Kyiv dismissed the civil lawsuit of Ukrsportzabezpechennya, so Stepantsov never had to return almost $130,000 to the state budget. Nowadays it is more than ₴3 million, which can be used to buy new apartments for Ukrainian paralympic athletes.

In 2015 Kostyantyn Stepantsov was named among the five best olympic coaches of Donetska Oblast. Recently he participated in organizing the training session of the Ukrainian team before the European Championships, being responsible for security measures.

Scheme No. 3. Playgrounds made of Gold

The Ministry of Sports and Youth paid an unfounded extra ₴1.2 million to build athletic playgrounds. Ukrdorkhim construction company inflated the prices and amount of services it provided. In the end, the company built 25 playgrounds for ₴7 million.

The fraud was established by a forensic commercial expert and the State Audit Service. The statement of acceptance of the non-existent ‘works’ was signed by the abovementioned Deputy Minister of Sports and Youth Serhiy Hlushchenko. The criminal investigation of Hlushchenko’s professional negligence has been pending for more than two years already.

Playgrounds were not the only affair of Ukrdorkhim. According to the Public Procurement Bulletin of Ukraine, Ukrdorkhim was chosen as a contractor for repairing a road in Vinnytsia oblast for ₴500,000.

Ukrdorkhim Construction Company, LLC was co-founded by Victor Herasymov from Kyiv and Rinat Yaushev from Vinnytsia. Nashi Groshi had already reported this publicly. Prior to that Rinat Yaushev was Director of Vinnytsia Asphalt and Concrete Factory.

Since 2008 Victor Herasymov is co-founder of Ukrdorkhim Company [Ed.: almost the same, but a different name] together with Volodymyr Zhukov. Since 2007 they are co-founders of Ukrdorkhim [Ed.: yet another company with a slightly different name] together with Oleh Zhurskyi. Since December 2013 Zhurskyi was the First Deputy Head of the State Agency of Reserves of Ukraine and from August 2014 to April 2015 — the head of this agency.

Scheme No. 2. Athletic Discus of the Flying Dutchman

Athletic equipment costing ₴200,000 disappeared during a reorganization of the enterprises owned by the Ministry of Sports and Youth.

In 2012 part of the property was split from the Union to create Concha-Zaspa Olympic Sports Training Center. Concha-Zaspa conducted an inventory audit and discovered that the discus throwing equipment was missing.

Now it is impossible to find the traces and the culprits because the Olympic Complex and Olympic Center never entered into a custodial services contract. For this reason the Supreme Economic Court of Ukraine could not establish who should compensate ₴200,000 to the state budget.

Scheme No. 1: There is No Such Thing as Free Rent

All this is minor compared to our ‘headliner’ — the corruption scheme, which led to Palats Sportu [En.: Sports Palace], the major Ukrainian arena for indoors sports, losing almost ₴4 million of uncollectible receivables.

Budivelnyk basketball club alone owes more than ₴1 million to the state budget for unpaid rent. The lawyers of Palats had won 11 courts decisions against Budivelnyk, yet for four years they haven’t changed their standard lease agreement which allowed private firms to avoid paying rent to state enterprises.

Palats lawyers answer all journalist enquiries with ‘currently the enforcement action of the court decision is pending’. They confirmed that the court decisions awarding damages to Palats haven’t yet been complied with by the defendants.

We prepared infographics, showing who is not paying their dues to Palats Sportu and how much are they due. 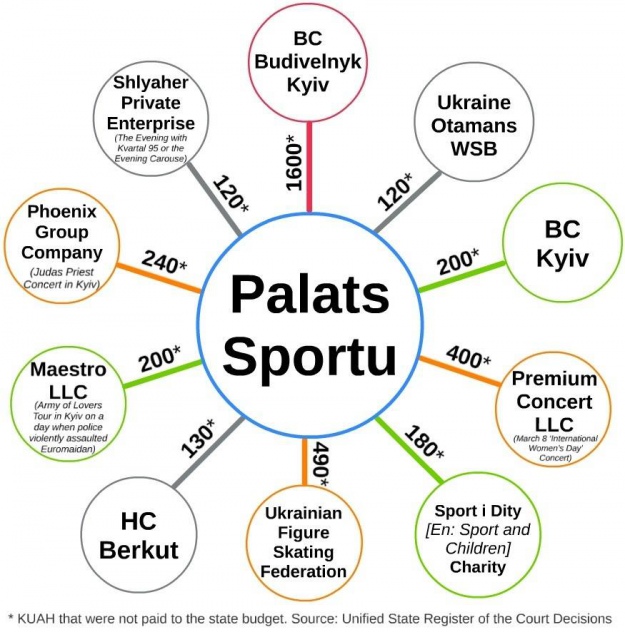 Currently Palats Sportu is being reorganized into Athlete Sports Complex. That is why it is important to remind sports officials about the multimillion losses which they must return now. Otherwise it might simply ‘get lost’ like the equipment for athletic discus throwers of the National Olympic Complex.

The investigation was conducted while participating in the CorruptUA Investigation Lab organized by Internews-Ukraine and sponsored by NED while interning at the Eidos Center.

A column serves to express the personal opinion of the author. It does not aim to be objective or comprehensive about the topic in question. The opinion of Ukrayinska Pravda editors may differ from that of the author. The editors are not responsible for the factual accuracy and interpretation of the information, our media outlet hereby only serves as a platform.

0 0 0 0
Comments — 0
Please authorize to add comments
Log out Rules of Commenting
Commenters who are offending others will be banned without prior notice. Information on such users might be provided to the law-enforcement agencies upon their request. No advertisements may be included into the text of the comment.