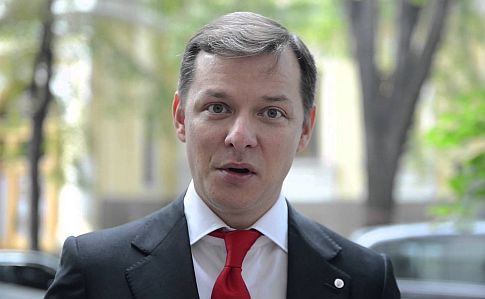 The home of Oleh Lyashko, the leader of the Radical Party, was visited at 7 am on Tuesday, June 21, by detectives of the General Prosecutor’s Office, a Radical Party MP Andriy Lozovyi reports on Facebook [ed: this Facebook post in the Ukrainian language]. The detectives, who were accompanied by special forces officers were going to break in but later apologized and explained that they got the address wrong.

Lozovyi thinks that coming with a search team to the home of a leader of the opposition at 7 am in the morning on the day of his mother’s birthday accompanied by special forces can’t have been a simple mistake. "Who can believe this chain of coincidence?" asks the MP. Oleh Lyashko also believes this was done to threaten him for his opposition activities [ed: this Facebook post in the Ukrainian language].

Lozovyi: Prosecutor General’s Office detectives and the special forces at the doorstep of Oleh Lyashko this morning. For those of you who are saying nobody tried to search Lyashko’s home and the whole story is PR.

At the same time, Larysa Sargan, the spokesperson for Prosecutor General Yuriy Lutsenko, explained on Facebook: "The Prosecutor General’s Office is not investigating Oleh Lyashko. A search is being carried out in a neighboring building. The MP is using the situation for his personal PR purposes."  [ed: this Facebook post in the Ukrainian language].

It turned out that the detectives confused Lyashko’s address with the address of Andriy Klyuyev, deputy prime minister during the time of President Yanukovych. Sargan reminded this was not the first time this happened, as Automaidan activists who came to protest at Klyuyev’s home in 2014 had made the same mistake [ed: this Facebook post in the Ukrainian language].

Lyashko still lives in the house where he moved in the winter of 2014, explaining this by the need to protect his family from being kidnapped by the Ministry of Internal Affairs. How he was going to protect himself by living so close to the former deputy prime minister, is unclear.

At the time, Lyashko said it was ‘the house of his friend’ and he was going to stay there temporarily. Ukrayinska Pravda asked him why he still lived in the house 1.5 years later, to which Lyashko replied he had all legal rights to rent and it was reflected in his declaration. The MP’s declaration for 2015 indeed says he rents the 549.5 square meters house at ₴5,000 ($200) a month, which is many multiples below the market price.

When asked about the cheap price of rent, Lyashko could not reply citing the bad quality of the road, and would not pick up the phone later.

55 23 5 0
Comments — 1
Please authorize to add comments
Log out Rules of Commenting
Commenters who are offending others will be banned without prior notice. Information on such users might be provided to the law-enforcement agencies upon their request. No advertisements may be included into the text of the comment.
IP: 176.126.163.---Володимир Гарасимчук21.06.2016 09:42
це називається ДОП...СЯ
ReplyQuote
All comments