Number of Ukrainian Victims of Istanbul Attack Rises to Four 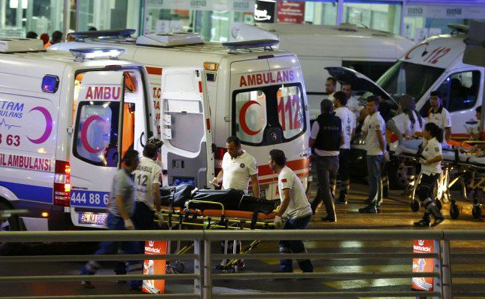 The number of Ukrainian victims of the terror attack in Istanbul increased to four, according to updated information of the Consulate General of Ukraine in Istanbul, the Ukrainian Department of Consular Affairs reports [ed.: the text of this Facebook post is in the Ukrainian language].

"Currently, a woman and two men are hospitalized in Istanbul with non-life-threatening injuries of different severity," the Department says. They were visited by the Consul of Ukraine in Istanbul. Another woman died in hospital from her injuries a day earlier.

Ukrayinska Pravda previously reported that one Ukrainian citizen was killed and one was injured in the terror attack on Istanbul Airport on Tuesday night, June 28.

12 20 1 0
Comments — 0
Please authorize to add comments
Log out Rules of Commenting
Commenters who are offending others will be banned without prior notice. Information on such users might be provided to the law-enforcement agencies upon their request. No advertisements may be included into the text of the comment.