SBU Finds a Cache with Weapons near Marinka 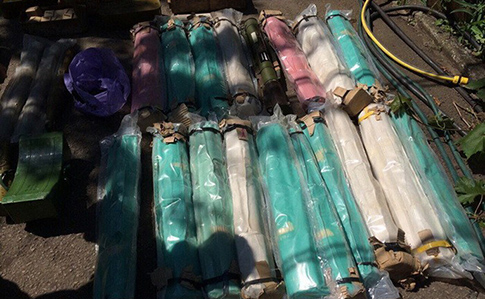 The Security Service of Ukraine (SBU) found a cache with many weapons in Marinka district of Donetsk oblast. Law enforcement officers have removed 18 RPG-22 rocket launchers, 50 RGD-5 grenades, 33 F-1 fuse grenades, 1 MON-90 anti-personnel mine, 2 RKG-ZEM cumulative hand grenades, and almost 8,500 cartridges of different calibers including armor-piercing and tracer cartridges, and cartridges for sniper shooting and shooting with a silencer.

According to investigators’  information, the cache was created by local citizens for further sending the weapons and ammunition outside the ATO zone. It is being decided whether they will be charged according to Article 263 of the Criminal Code of Ukraine, "Unlawful handling of weapons, ammunition or explosives."

4 16 6 0
Comments — 1
Please authorize to add comments
Log out Rules of Commenting
Commenters who are offending others will be banned without prior notice. Information on such users might be provided to the law-enforcement agencies upon their request. No advertisements may be included into the text of the comment.
IP: 220.239.119.---zmaylo26.06.2016 09:27
А попробуйте "сховище"
ReplyQuote
All comments