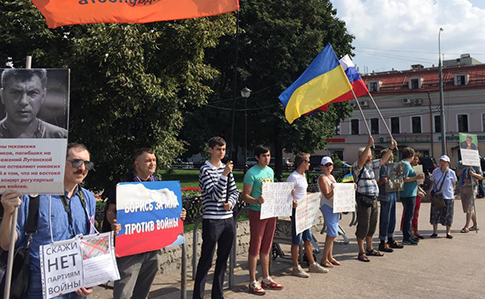 The members of pro-Kremlin radical movements NLM (National Liberation Movement) and SERB (South-East Radical Bloc) attacked the participants of the anti-war meeting against Putin’s policy towards Ukraine, the latter reported on Facebook.

According to the organizers, the meeting was approved with the local authorities. It was attended by some dozens people.

The radical representatives of the Russian nationalist movements made provocations and attacked the meeting participants, while the law enforcement officers were on spot.

23 6 4 2
Comments — 0
Please authorize to add comments
Log out Rules of Commenting
Commenters who are offending others will be banned without prior notice. Information on such users might be provided to the law-enforcement agencies upon their request. No advertisements may be included into the text of the comment.
Breaking News
Russia Threatens Retaliation for Ukraine’s Drill near Crimea. Text of the Diplomatic Cable
NAZK Starts Full-Scale Operation of E-Declaration
Special Communication Service: E-Declaration System Ready for Launch
Avakov Calling SBU to Go At Inter TV Channel
All News