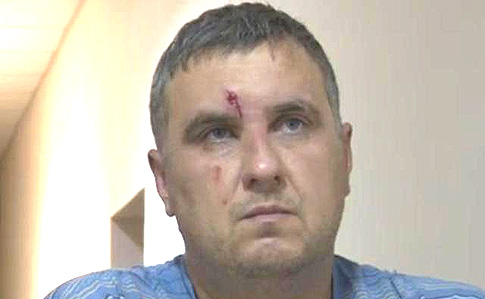 Ukrainian citizen Yevhen Panov was kidnapped in Zaporizhzhia Oblast and taken to Crimea, according to his brother Ihor Kotelianets.

Kotelianets told journalists that his brother went on a short trip to meet with one of his friends, the man doesn’t know who exactly. Panov was fighting in Donbas in 2014 and 2015, and was volunteering to help with provisions for the frontline after he demobilized, so he has a wide network of contacts.

The family started getting concerned when after leaving home on Saturday morning, Panov did not show up or contact them on Sunday and Monday. On Tuesday, they started searching for him more actively, and on Wednesday, August 10, they found out from the news on Ukrayinska Pravda that he was arrested by occupying authorities.

When Kotelianets saw his brother on Russian TV, he immediately recognized him. He says Panov was wearing his regular casual clothes, so he must have been captured when he was out doing errands.

FSB blamed Ukraine for attempting to perpetrate terror attacks in Crimea earlier, and claimed that "one of the organizers of the prevented terror attacks is Oleksandr Panov, b. 1977, living in Zaporizhzhia oblast, Ukraine, officer of Ukrainian Defense Intelligence."

Ukrainian authorities deny the allegations and accuse Russia of making up stories to cover up its activities on the occupied peninsula.