SBU Refuses to Disclose its Involvement in Surveillance of Sheremet 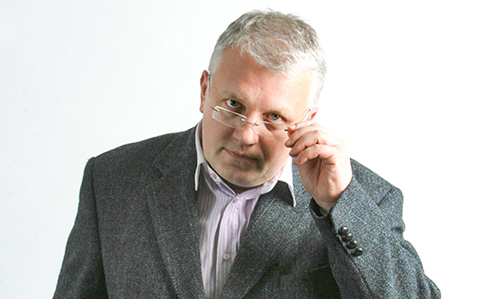 The Security Service of Ukraine (SBU) has refused to report whether it organized surveillance of Ukrayinska Pravda journalist Pavel Sheremet and Founding Editor Olena Prytula in its response to a Ukrayinska Pravda information request.

"According to the law on investigative activities, it is prohibited to disclose information on whether specific investigative actions were taken with regard to a specific person," the SBU replied as it advised to seek comments of the National Police and Prosecutor General’s Office (GPU). 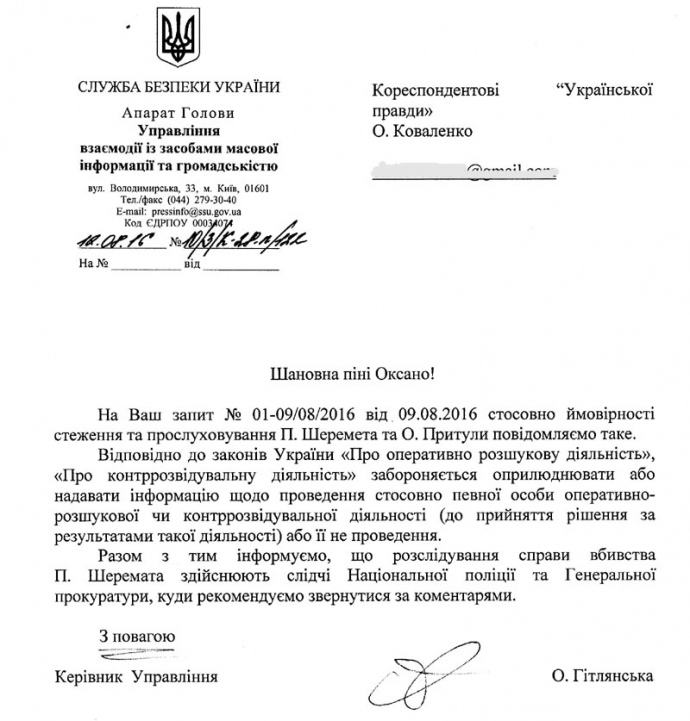 Ukrayinska Pravda requested the SBU to provide any information on surveillance of Sheremet and Prytula and whether their phones were wiretapped.

Pavel Sheremet died on the morning of July 20, 2016 after his car, which was owned by the Founding Editor of Ukrayinska Pravda Olena Prytula, exploded. Prosecutor General Yuriy Lutsenko named the professional activity of Sheremet as the main motive of the assassination.

On July 22, mass media published a video of the alleged planting of the bomb which killed Sheremet.

On August 4, the investigators informed that some 500 witnesses were interrogated, around 150 CCTV cameras were seized and over 140 TB of information were gathered. They also asked for help in finding witnesses in this case. The Interior Minister Arsen Avakov said that the police are ready to pay ₴200,000 for any information in the Sheremet case that would lead to solving the crime.

Subjects: Sheremet
0 9 0 0
More on this Subject
Sheremet Murder: FBI Technology May Help to Identify Suspects 11 August 2016, 13:04
Lutsenko: There Is Progress in Sheremet Murder Case 10 August 2016, 12:11
National Police Starts Internal Investigation of Surveillance of Sheremet 6 August 2016, 19:46
Comments — 1
Please authorize to add comments
Log out Rules of Commenting
Commenters who are offending others will be banned without prior notice. Information on such users might be provided to the law-enforcement agencies upon their request. No advertisements may be included into the text of the comment.
IP: 93.75.42.---formalin12.08.2016 13:57
Та, за логікою, мала б стежити певний час і потім періодично контролювати. І це нормально. Але якщо стеження велося постійно до останнього часу - то це вже викликає питання...
ReplyQuote
All comments