Russia Threatens Retaliation for Ukraine’s Drill near Crimea. Text of the Diplomatic Cable

Ukrayinska Pravda had obtained a document confirming threats of the Russian Ministry of Defence to launch an air attack on Ukraine, after Ukraine had announced its plans to conduct a military exercise near Crimea [Ukrainian territory which is currently illegally occupied by the Russian military].

UP had obtained a copy of the diplomatic cable by the Russian Ministry of Defence, addressed to the Office of the Military Attache of the Ukrainian Embassy in Moscow. 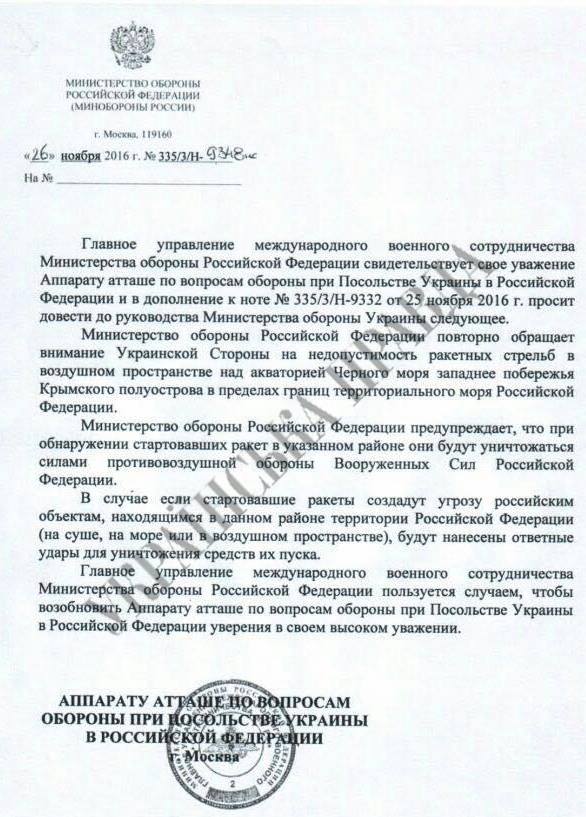 "The Ministry of Defence of the Russian federation cautions, that if the rockets are launched within the indicated area, they will be destroyed by the air defence forces of the Russian Federation," — states the cable.

"Should these rockets create danger for the Russian objects, located within the stated Russian territory (be it ground, sea of air), there will be military strikes to destroy the equipment used in the launches," — the cable continues.

As it was already reported by Dzerkalo Tyzhnia, with reference to the Ministry of Defence of Ukraine, Russia threats a retaliation strike if Ukraine conducts a military excersice involving rocket launches in the vicinity of the administrative border of Crimea. The information was later confirmed by the Ukrainian diplomats.

Replying to the Russian MoD, Oleksandr Turchinov, the Secretary of the Security and Defence Council of Ukraine, asked Russians not to panic.

He stressed that Ukraine is conducting its military excersice within its sovereign territory and air space in accordance with all the obligations it had undertaken under the relevant international treaties.

Dmitri Peskov, the spokesman for the Russian President Vladimir Putin, could not answer a question, whether his boss is planning a military response to Ukraine’s launches.