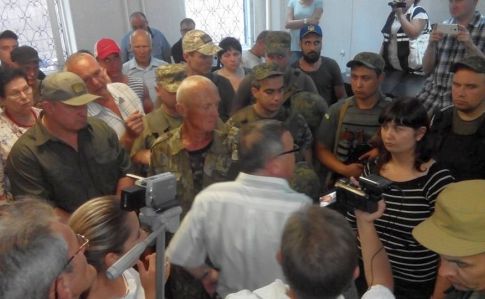 The hearing in the ‘case of Hordeyev’ — a case on the murder of SBU officer Viktor Mandzyk in Volnovakha — in the Prymorsk district court of Mariupol on June 27 ended with clashes between the participants of the hearing, according to media reports and the lawyers of the defendants.

According to the local news website 0629 [ed.: the text of this hyperlink is in the Russian language], unidentified armed law enforcement officers have previously inflicted injuries upon the defendants and their relatives in the hospital where the defendants were taken on June 26 after the hearing due to not feeling well. Oxana Tomchuk, one of the lawyers of defendant Denys Hordeyev, reports on Facebook [ed.: this Facebook post is in the Ukrainian language] that her client was beaten by six people. Another lawyer, Vitaliy Pogosyan, confirmed that Denys Hordeyev had injuries.

At 5:20pm on June 27 the period of detainment for the defendants was up, and since the court has not made any decisions about further pre-trial restrictions (e.g. detention) for them by that time, they exited the courtroom cage themselves and headed to their relatives, but special forces did not allow them to exit the room. The defendants are accused of attempted escape, but the activists say their actions were legal. 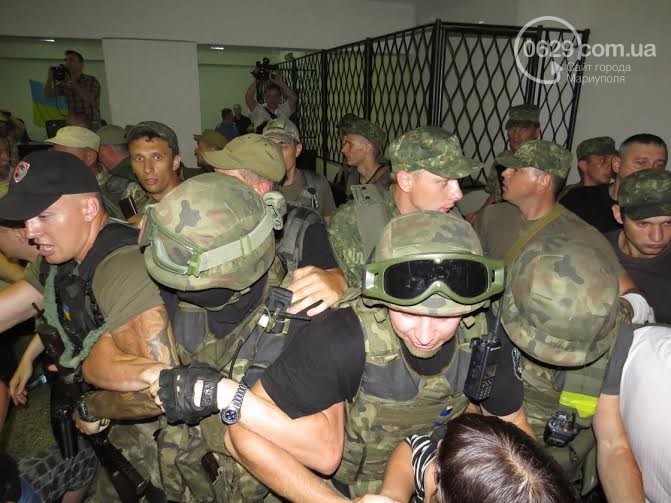 In the comment to 112 Ukrayina TV channel, police general Vyacheslav Abroskin said: "Some relatives and people close to the defendants wanted to disrupt or delay the court hearing, provoke the police officers, destabilize the situation, and not let the court make the decision. Right now, the situation is stable, everybody is in the courtroom, the defendants tried to escape, but Donetsk oblast police is on site to detain them and ensure public order in the courtroom and vicinity."

According to the prosecutors, on March 21, 2015, Denys Hordeyev, Pravyi Sektor fighter call sign Advokat, with two friends while under the influence of alcohol stopped three trucks under the pretext of countering smuggling of goods and asked the drivers for documents. Officer of the Security Service of Ukraine Viktor Mandzyk arrived on site, and was reportedly killed by ‘Advokat’ with his own service weapon, an AK74V automatic rifle.

MP Ihor Mosiychuk wrote on Facebook [ed.: this Facebook post is in the Ukrainian language] that although Hordeyev is accused of organized crime and murder of an SBU officer, he and his people were indeed countering smuggling that was being overseen by the SBU.

13 9 2 0
Comments — 0
Please authorize to add comments
Log out Rules of Commenting
Commenters who are offending others will be banned without prior notice. Information on such users might be provided to the law-enforcement agencies upon their request. No advertisements may be included into the text of the comment.