Poroshenko: Restoration of Control Over the Border is a Key to Implement Minsk 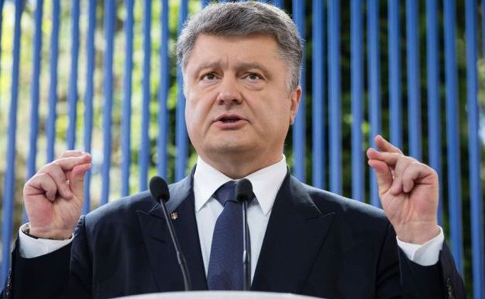 During a press conference on May 28, 2016 President Poroshenko stated [ed.: the text of the tweet is in the Ukrainian language] that the restoration of Ukraine’s control over its borders on the temporarily occupied territories is a key to carry out the Minsk Agreement, as he greeted the Ukrainian border guards.

"Border control is crucial to implementing Minsk Agreement. Putin uttered that we allegedly can start with the so-called ‘political’ issues and elections before we proceed with the ceasefire and restoration of control over the border. This is how they see the elections - at the gunpoint of Putin’s forces. How can we stop them, if they open up fire intermittently? Russian military and their mercenaries acting under Russian command are the ones starting the fire," underlined Poroshenko, as he referred to the evidence by the State Security Service and the Main Intelligence Department of Ukraine, — Interfax Ukraine reports.

"The Minsk Agreement stipulates withdrawal of illegal armed groups and military equipment as well as the militants and mercenaries from Ukraine and restoration of Ukraine’s control over its state border," President Poroshenko reminded. He also called for deployment of an OSCE armed police mission.

He told that over 15,000 border guards were involved into the military conflict caused by the Russian aggression, and 67 of them gave their life to Ukraine. He thanked every defender of Ukraine and pledged to have their salaries increased.

11 12 1 0
Comments — 1
Please authorize to add comments
Log out Rules of Commenting
Commenters who are offending others will be banned without prior notice. Information on such users might be provided to the law-enforcement agencies upon their request. No advertisements may be included into the text of the comment.