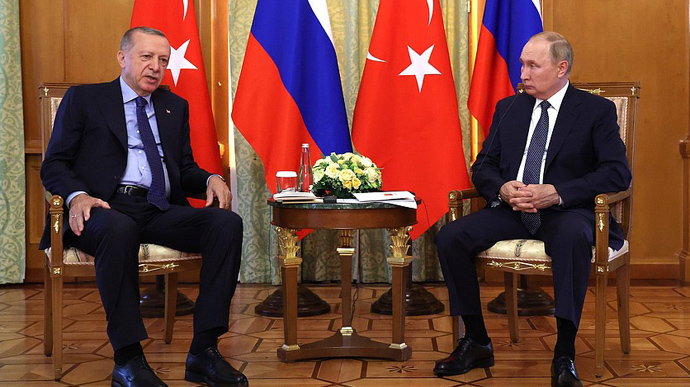 Turkish President Recep Tayyip Erdoğan and Russian President Vladimir Putin have concluded their meeting in the Russian city of Sochi after over four hours of talks.

The Kremlin’s official website states that Putin said, at the beginning of the meeting, that the presidents would discuss large-scale joint projects between Turkey and Russia, such as the Akkuyu Nuclear Power Plant or the TurkStream [a natural gas pipeline running from Russia to Turkey - ed.]. Putin noted that the latter supplies Russian gas "not only to Turkish consumers, but also to European ones".

Putin has also raised the question of Ukrainian grain supplies via the Black Sea ports.

He added that he would discuss "questions of regional security, and in particular […] the Syrian crisis" with the Turkish president.

Earlier reports indicated that Putin would be joined by Chechen leader Ramzan Kadyrov during his meeting with Erdoğan. The end of Russia’s war with Ukraine and the possibility of a Turkish offensive in Syria were expected to be the central topics of discussion.

Journalists fight on their own frontline. Become our patron, support our work!

Ukrainian Ministry of Defence distances itself from explosions at Crimea airfield

All News
RECENT NEWS
20:09
Ministry of Defence of Georgia denied the data transfer about Georgians fighting in Ukraine
20:03
The Russian Federation explained the explosions at the airfield in Crimea as a "fire safety violation"
18:57
Cache of Russians with weapons and clothes was found near the border with Belarus
18:55
Ukrainian Ministry of Defence distances itself from explosions at Crimea airfield
18:52
Russian Defence Ministry comments on the explosions in Crimea: No deliberate strike
18:23
Russia to connect Zaporizhzhia NPP to Russian-controlled power grid in Crimea
18:10
Explosions in Crimea: Russian authorities claim 1 person killed, 5 injured
17:53
Ministry of Defence of Georgia may have transferred data on Georgian volunteers in Ukraine to Russian Federation
17:36
Families of Russian military personnel have begun to be deported from Kherson – Oblast State Administration
17:25
Too early to talk about the cause of explosions in Novofedorivka – Aksyonov
All News