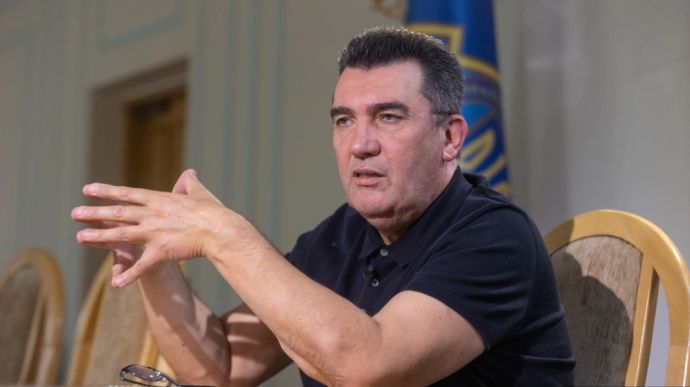 Oleksii Danilov, Secretary of the National Security and Defence Council (RNBO), has said that the Ukrainian military personnel using heavy artillery had driven Russian forces away from Zmiinyi (Snake) Island. He also noted that the Russians had carried out robust radio reconnaissance from the island.

Source: Oleksii Danilov, Secretary of the National Security and Defence Council (RNBO), on air of the "Great Lviv Speaks" project.

Quote: "Now, regarding Zmiinyi Island. The way the Russian Federation interprets the events – that they allegedly left as a gesture of good will –  is not consistent with reality.

In fact, they were dislodged from there by our heavy artillery. Our Armed Forces using all means available inflicted the respective damage twice.

There was nowhere to hide, and they [Russian troops - ed.] had to flee.

This is a very strategically important point for us. After all, they [Russian troops - ed.] used this facility to monitor Odesa Oblast, the Bessarabia region, and issues in Transnistria. They had a very powerful position there, on our territory, from the radio reconnaissance perspective."

Details: Oleksii Danilov added that the territory of Zmiinyi (Snake) Island "is currently clean", and there are no invaders there.

Background: Following the successful liberation of Zmiinyi (Snake) Island, Oleksii Danilov, mocked the Russians and asked the Ministry of Defence and the General Staff [of Ukraine] "what’s up in our [Ukrainian] Sevastopol?"

Zelenskyy: Ukraine should return everything, no frozen conflict should remain

Zelenskyy calls on West to close borders to all Russians

Russia withdraws its nuclear weapons from US inspections

Aimed at an apartment building from a tank: the Russian soldier is sentenced to 10 years in prison

All News
RECENT NEWS
00:45
Zelenskyy spoke with Bill Clinton and thanked him for supporting Ukraine
00:07
Ukraine's ambassador to Israel on rocket shot down near Uman: Russian attacks could result in Jewish casualties
23:35
Zelenskyy: Ukraine should return everything, no frozen conflict should remain
23:13
Ukrainian Air Force downed Russian missiles this afternoon and evening – Zelenskyy
22:50
Zelenskyy calls on West to close borders to all Russians
22:29
Explosions reported in occupied Melitopol – Mayor
22:13
130 strikes in one day: woman killed in heavy Russian shelling of Sumy region
22:00
Russians damage Kharkiv thermal power plant which provides one-third of the city with heat – Oblast Military Administration
21:27
Kuleba on CBS and Amnesty data: their lies have had no effect on weapons supply
21:15
Ukraine calls on IAEA to visit Zaporizhzhia Nuclear Power Plant in August
All News