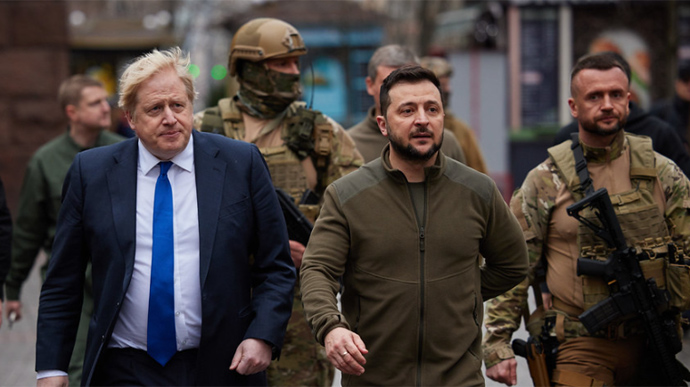 Source: Ukrainska Pravda article "From Zelenskyy's "Surrender" to Putin's Surrender. How Negotiations with Russia Are Going".

Quote from the article: "The Russian side…was actually ready for the Zelenskyy-Putin meeting.

But two things happened, after which a member of the Ukrainian delegation, Mykhailo Podoliak, had to openly admit that it was "not the time" for the meeting of the presidents.

The first thing was the revelation of the atrocities, rapes, murders, massacres, looting, indiscriminate bombings and hundreds and thousands of other war crimes committed by Russian troops in the temporarily occupied Ukrainian territories…

The second "obstacle" to agreements with the Russians arrived in Kyiv on 9 April."

Details: According Ukrainska Pravda sources close to Zelenskyy, the Prime Minister of the United Kingdom Boris Johnson, who appeared in the capital almost without warning, brought two simple messages.

The first is that Putin is a war criminal, he should be pressured, not negotiated with.

And the second is that even if Ukraine is ready to sign some agreements on guarantees with Putin, they are not.

Johnson’s position was that the collective West, which back in February had suggested Zelenskyy should surrender and flee, now felt that Putin was not really as powerful as they had previously imagined, and that here was a chance to "press him."

Three days after Johnson left for Britain, Putin went public and said talks with Ukraine "had turned into a dead end".

Three days later, Roman Abramovich arrived in Kyiv again, and President Zelenskyy officially stated that there could be two security agreements with Russia: one would concern Ukraine's coexistence with Russia, the other - only security guarantees, because not everyone "sees themselves at the same table with the Russian Federation ".

After that, according to Ukrainska Pravda sources, the bilateral negotiation process was paused.

"We are once again facing a common enemy": Valerii Zaluzhnyi congratulated Polish colleagues on occasion of their holiday

Zelenskyy to Russians: If you remain silent, you are complicit in war

All News
RECENT NEWS
12:09
Occupiers attack Kharkiv, hit an apartment building and a public transport stop
11:09
"We are once again facing a common enemy": Valerii Zaluzhnyi congratulated Polish colleagues on occasion of their holiday
10:59
President's Office calls on the Red Cross to intervene in the pseudo-trial of the militants over the prisoners
10:33
Security Service of Ukraine arrests medical worker in Odesa Oblast who "leaked" data on the location of the Armed Forces
10:31
Ukrainian Air Force downs Russian helicopter again – third in three days
09:58
Occupiers go with "inspections" to garages and apartments of Kherson residents – Oblast Military Administration
09:35
Russian Forces lose another 12 tanks and 200 military personnel
09:12
Ukrainian Armed Forces bring down Russian missile over Dnipropetrovsk Oblast
09:00
Russians launch more than 10 rockets on Kharkiv Oblast from Belgorod, some fail to reach their targets
08:47
Ukrainian Armed Forces neutralise Russian reconnaissance group and repel 8 Russian attacks in Luhansk Oblast
All News